Ian Phemister
Coffs Harbour, New South Wales, Australia
I am a 32 year old Modeller who has an interest in the NSWGR in the late 50's early 60's of the Muswellbrook to Merriwa Branch. I am currently involved with the co ordination of the Coffs Harbour Railway Modllers exhibition layout. I currently work for Bluescope Lysaght as a Truck Loader and leading hand on the afternoon shift. I am happily married and have a 2 year old Daughter.

As one can imagine, so much can happen over six years. Family, work, car restorations, model railway building etc. I guess the most exciting and the reason for lack of progress on the Muswellbrook layout was the building of the Australian Modeller shop layout. It was built with the assistance of several close modelling friends over a four year period. This was kept pretty secret as we agreed that people should go to the shop to see it. I also kept all the build progress photos from being shown, even Peter Wilks did not see many pics until it was delivered and installed in the shop.

Several people have asked why we would take on such a project as this would no doubt slow the progress of any personnel modelling projects. It was done as a experiment to try new ideas and different products. The methods and products can be used on our own layouts in the future to produce the best results possible. I think we achieved that on the AM shop layout by the many great responses past on to us. I will post a couple pics here but be sure to get to Australian Modeller to see it for yourself.

The display was installed into the shop last September and was well received by those present that day. 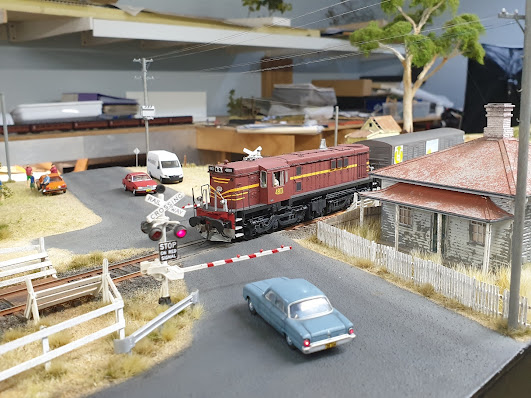 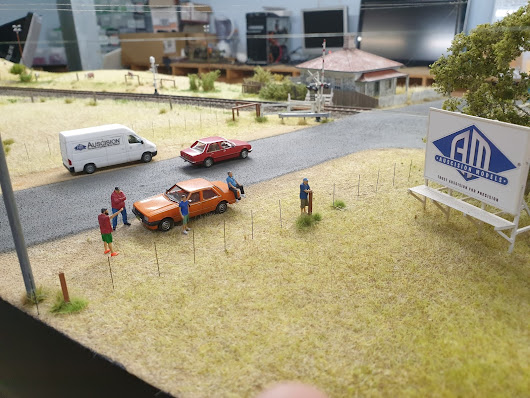 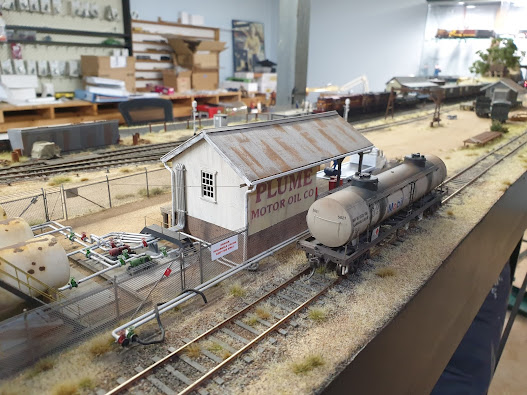 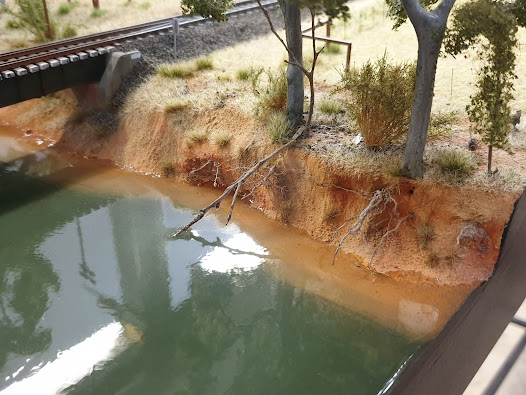 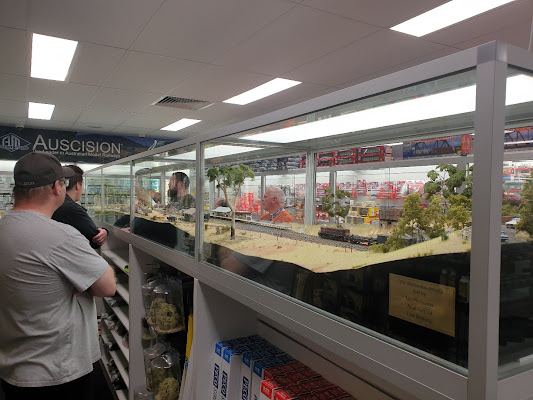 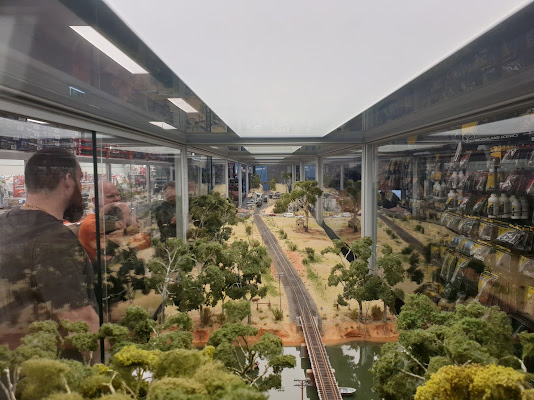 2020 was certainly an interesting one. My work load, seemingly from the COVID crap, doubled and finding time to do anything for myself was difficult. It was even a struggle to get the AM shop layout finished. I could imagine how many layouts don't get to that finished stage. I really wanted the AM layout finished before it was installed. Although it reached that finished stage in the end, there was still a few things I would have like to add. It was a weight off the shoulders when it was finally gone but am very proud of it as well.
Christmas Holidays bought a welcome break and I was determined to get at least something started on the home layout. Way back in November 2013 I had started on the roundhouse for Muswellbrook depot. Even before then some of the benchwork was in place for the main yard and depot area at Muswellbrook but that's about it. The roundhouse building has not changed but some benchwork has been extended.
I have also changed some ideas on the overall plan of the layout. Originally I was going to include a section of the mainline to climb over the Liverpool range. Way too ambitious for the size of the room. I have decided to model the junction just south of Muswellbrook called St Heliers. St Heliers was the junction for a short branchline run to the Muswellbrook No.1 and No.3 colliery's. This will give some extra operation to the overall layout and fill in the story of how the area was worked, especially for coal movements. Even this location once some research was done is quite large and spread out. The 1952 track diagrams show the proposed installation of an up and down siding which extended east from St Heliers to Grasstree plus up and down refuge and Guards van sidings. It was to also include the addition of a Type O2 signal box. Although I have read that this duplication to Grasstree was abandoned for quite some time. I am unsure if the changes and Box were made at that time. Maybe the knowledgeable can confirm. Either way, this proposed 1952 plan will not fit the area I have so will stick to the pre 52 plan of just the single loop with junction. I would still like to model the signal box and will most likely change the name to Heliers, rather than St Heliers, keeps the detail police at bay!
On with construction then.
The L girder benchwork was run down the east wall of the room to accommodate the mainline. This prototypically swings right out of Muswellbrook heading east toward St Heliers.
This section will include the Y that was used for turning the Garrett locomotives. This Y will be constructed on a partial swing down section so it can be stored out the way of the isle when not in use.
The pics below show where I am up to. All the plywood section has been routed for drainage and cut and and raised for variation of ground level. The curved slots at the right of the first pic are to accept the spline sections for the mainline and Y. I used the spline roadbed technique on the AM shop layout with great success. Although a little time consuming it gives natural transitions, or easements, between curves and does not tend to 'rollercoaster' like plywood. Ian Millard perfected this technique before me on his Liverpool Range home layout and was the obvious choice. 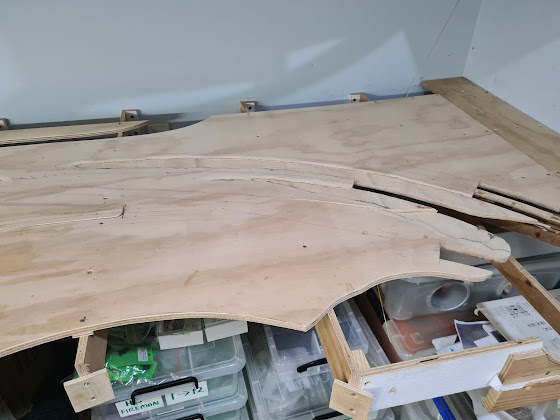 This picture shows the start of the spline for the mainline. The widened section is for the Y. 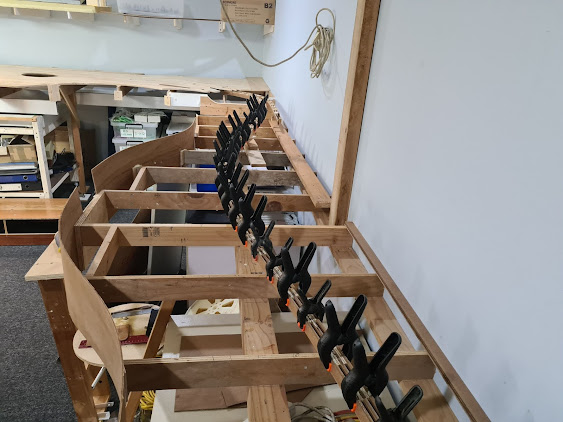 The spline sections are now complete for the mainline and the Y but are only temporarily supported. I need to adjust the mainline to drop down from Muswellbrook yard at 1.5%. I want the line to the Y to drop away at 2% so as it sits slightly below the mainline and on the side of the hill/embankment. 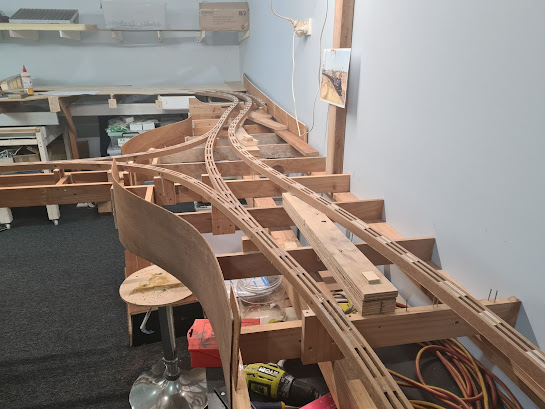 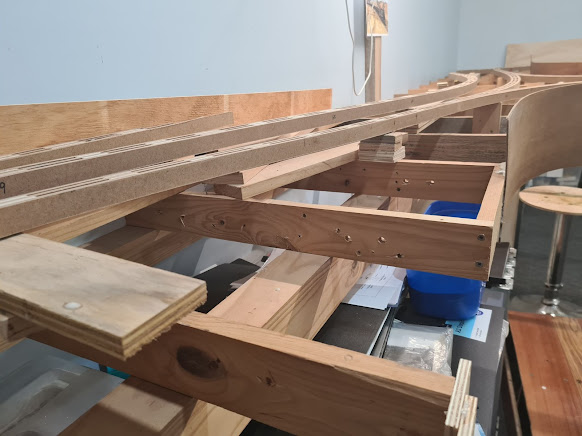 That's all for now. I will create a Facebook group at some point were this will be duplicated for the die hard Facebook fans that don't follow the blog.
Lets hope its not 5 years till the next post!

Posted by Ian Phemister at 3:45 AM